When a customer (particularly a new one) needs to find out or figure out how much cerium oxide to put in the tank, there are two methods in use:

1. The **“Dwight” method. This is whereby the machine operator can tell if the cerium in the machine is of sufficient quantity, either by looking at the slurry, or on his hand.. On his hand? Operators will put their hand in the cerium slurry, scoop some of the slurry out, and then see how much cerium stays in the creases of the palm. This is a crude approximation at best.

2. Usage of a “baume” gauge. This is actually a hydrometer. A hydrometer is a glass tube that “floats” in the water.

A Baume gauge is typically calibrated from 0 (zero) to 25. A reading of between 3 to 5 on this scale indicates the proper amount of cerium suspended in the water.

The Baume Gauge, (available from Matodi) can be relatively expensive, and fragile. It is a tool that should be used on a regular basis; but it often gets misplaced, or broken. Or worse, the owner or manager locks the baume gauge up, and the operator has to ask permission to gain access to it. The net result is the gauge does not get used, or used properly.

It is also possible to use a common salt water hydrometer; available in any Hobby Aquarium store that carries salt-water fish supplies. I bought one for under $7.00 USD recently. A salt-water hydrometer is not calibrated in the same scale as a “baume” gauge.

Here are the results of direct comparisons between a commercial baume gauge, and a standard off the shelf salt-water hydrometer: 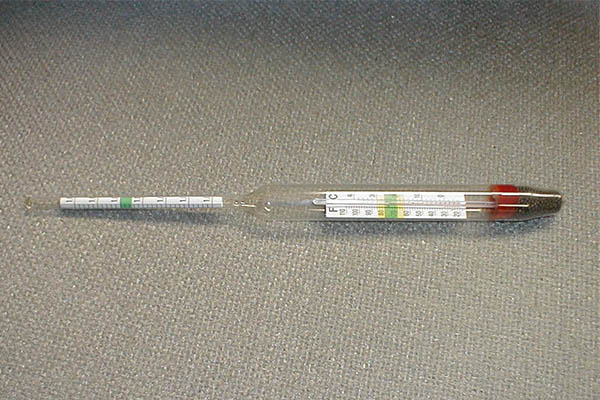 The thermometer scale could also be useful; as Cerium reaches it’s best working potential in the range of 20 to 30C, or 68 to 86F.

Proper usage of the baume gauge/hydrometer

A glass (or plastic) tube that will hold the water to a sufficient depth to float the hydrometer will be necessary. Do not try to measure in the tank of the machine. The machine must have been run for at least a few minutes to properly mix the solution. The water/cerium solution is placed into the tube or cup, and the hydrometer is then floated in the solution. The hydrometer will then float to a certain depth, indicating the amount of suspended solutions in the water.  Add cerium or water as needed into the tank of the machine, and repeat test.

Our goal is to increase the efficiency of your operation, by not wasting any cerium oxide powder. Cerium is expensive, so the better you monitor the actual cerium content in your slurry tank, the lower your eventual operating costs will be.

** Dwight Royall was a degreed engineer, and probably the brightest and best technician the industry had ever known. Dwight passed away a few years ago, and we all surely miss him.